Home » Develops People » First Rule of Bossing – Do No Harm 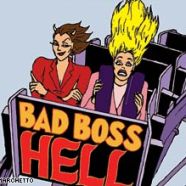 First Rule of Bossing – Do No Harm

Posted by Jeffrey Thomason on April 28, 2014 in Develops People, Empowers Others, Focus on Outcomes | Leave a comment

Stanford professor Robert Sutton is well known for his theories on management and business, with over a dozen books to his credit.  His most popular work is about being civil in the workplace, which at its core is about the Golden Rule. It is unfortunate that in any conversation about workplace jerks, the buck stops pretty squarely in front of those in charge. A 2007 Zogby Study found some pretty eye-opening statistics about the dynamic between leaders and followers:

Leadership is about behaviors.  Some are positive and make people happy, help them improve, and generally assist them in being productive to the organization and its mission.  Others are negative, and destructively so.  They make people unhappy, decrease or limit a person’s effectiveness, and fail to advance the team toward the desired end state.  In their most vicious application, they can cause the team to break down, systemic failure, and the collapse of the organization.  If you were trying to make a buck, you won’t.  If you are trying to provide a service, it will suck.  And, heaven forbid if people’s lives depended on that service. Enough said.

Taken further, leadership is about behaviors by people in leadership positions, and their effects on the organization and the people within it. Nothing more or less. It is generally true that “leadership behavior” is encouraged and exhibited by everyone with or without a title in the most successful of organizations. However, in the end the measure of a person’s satisfaction with their job comes down to their relationship with their boss. So, if one of the team is less than happy with the way things are going, check the mirror and you might find the reason.

So, how might this behavior take place?  Sutton identified a “dirty dozen” of ways in which bosses bully their team. Personal insults, invading personal territory or uninvited personal contact are contact fouls at the top of the list. Verbal and non-verbal threats and intimidation are crowd-pleasers everywhere that really fire people up to come into the office and give it their best.  Overuse of sarcasm, teasing, or other public forms of shaming or displays of office status are guaranteed to ensure that the next great idea the team has stays firmly in the owner’s head and not put into use.

Another way to beat down the group and discourage people is just being plain rude, giving silent but dirty looks, and a common boss trick everywhere, pretending someone is invisible.  In the last instance, this can take many forms, including excluding people socially, leaving  them off the company outings, sporting events or after-hours meetings. They will schedule meetings when they know their target have a conflict in your schedule. And they may go so far as refusing to allow the victim to attend work meetings or work lunches.

The Society for Human Resource Professionals has been involved in workplace surveys on this topic for years.  One immediate step most seasoned HR professionals try to do is draw a distinction between the “bully boss” and the “tough boss”. “Bully bosses” frequently misuse of power and authority, focus on personal self-interest, as opposed to the good of the organization, are prone to emotional outbursts, and are often inconsistent and unfair in their treatment of employees. In contrast, a “tough boss” is objective, but fair and professional, self-controlled and unemotional, focused on performance, and insistent upon meeting high standards and holding employees equally accountable for meeting those expectations. They consistently operate in such a way as to achieve the best interests of their company.

As a leader, your mission is to know and understand how your “style” affects people.  It is also your mission to know to the extent possible which style works best with your team and have the necessary self-discipline and emotional intelligence to put the organization first if there is a conflict. The most frequent intent of a bully boss is purposeful malice towards a single person, expressed directly through the supervisor-employee relationship. Tough bosses are fair and equal in their expectations and have no malice in their directions at work.

One horrible by-product of bad bosses is that they tend to breed future bad bosses.  There is a strange dynamic in the daily hazing, shaming, and degradation of staff that at some point compels an individual to perversely accept it in order to move up and get into a position to behave the same way.  Sort of an “industry standard” or “I got hazed, so you are getting hazed”. This kind of logic breeds a weird workplace and shows up in some interesting places, like the military. For anyone who has served aboard ships and tried to qualify as a watchstander, apparently hundreds of years ago, it was universal to treat newbs like dirt. And equally universal, when it became your turn to break in a junior, you had to behave the same way. You can find this behavior throughout the profession of arms, as well as the workplace that Zogby polls.  However, the military also produces some fantastic leaders who are more likely than not to be in the “Tough Boss” mold and not the other.

In the end, bullying produces within an instinct for survival that transcends whatever it is your team is supposed to be doing.  If someone is forced to stay in a job because they have no other options, bills to pay, etc., you can bet they won’t be adding much to the mix.  And, as Zogby noted, if it becomes a choice between sanity or a job, people will vote with their feet and drop you like a hot skillet.