Posted by Jeffrey Thomason on April 26, 2014 in Fosters Collaboration and Teamwork, Recognize and celebrate achievement, Value Diversity | Leave a comment

Shakespeare’s use of jealousy, in families and governments, was a constant theme throughout his works. His use of this theme was consistent with the era and the predominance of the Catholic Church in those times. Envy was identified as one of the seven deadly sins by Pope Gregory and then used by Dante in his “Divine Comedy” over 300 years before the Bard wrote his famous quote about the “green-eyed monster”.

Envy, or jealousy, has been a central character in the human drama throughout our history. Today, we have made no greater strides today in perfecting human control of this emotion than did the self-destructive Othello. And thus, therein lies reason to talk about that which “Doth, like a poisonous mineral, gnaw my inwards”.

Envy of colleagues is a common disease in the workplace. The best office or cubicle, recognition and reward, access, resources, training opportunities, promotions, and other tangible (or intangible) indicators of organizational wealth can all be the source of the “trifles light as air” which become “holy writ” to the jealous. Menon and Thompson’s work on jealousy defined the consequences for an organization as both dividing and distracting. Despite being an “emotional” response, the toll could have huge financial consequences.  Envious people could fail to acknowledge good ideas, undermining innovation or reform. During their study, they identified employees who had damaged their careers, wrecked companies, and sabotaged co-workers to the point of violence. Envy is also a source of workplace bullying, driven by fear and anger and generally directed at the least powerful members of the team.

The sources of envy could be many but more often than not, boil down to a lack of self-esteem or assertiveness, which leads to resentment when colleagues experience success. One source of envy could unwittingly be the boss. When an outsider comes into an organization and inherits a senior team of experienced staff, in due course that group will become populated with staff directly chosen by the boss.  The perception that these “hand-picks” are more favored or trusted than the “old guard” is a dynamic that could permeate any decision-making process. Or, there could be a person in the organization who has neither title nor authority but is perceived to have the “ear” of the boss and thus, is envied by colleagues who resent this apparent undermining of their authority.

Ultimately, envy is a zero-sum thought process….if they win, I lose.  It is as simple as that.  There are certainly circumstances where this may be true (for a moment), like a promotional opportunity, but the research shows this to be a tiny fraction of the various ways and means that envy stalks the workplace. So, having identified the problem, as leaders, what can we do?

First (and foremost), leaders have the absolute and unswerving responsibility to deal with envy head on. Identifying it for what it is, and (hopefully) have organizational values that run contrary to the behavior which can be used to illustrate the acceptable path “on this team, right now”. You will not eradicate envy from your workplace, so that would be the wrong end of the stick to grab.  Instead, the key to success is creating a work environment where envy has a difficult time taking root. Using teams, incentivizing cooperation as a foundation to workplace initiatives, hiring for emotional intelligence, and maintaining open communication are all workplace themes that will support a positive environment.

The workplace is a competitive place and pretending otherwise is not a potentially effective strategy. On the other hand, organizations are rarely made up of a homogenous set of parts but rather function-driven groups that each serve a basic purpose to advance the goals of the big picture. Valuing the diversity that each group brings is a daily mindset that the leader exemplifies and values, publicly, and often. As with so many things, leaders are used by others as the barometer of the organization and can go a long way toward creating that ideal place, or conversely, ensuring that a culture of anger, resentment, lack of appreciation, and them-and-us barrier building is the order of the day. Dysfunctional organizations spend a lot of time looking over their own fences to see what is going on in the backyards of others, and then using their perceptions to fuel a vicious cycle of “trifles, light as air”. Functional organizations know what they are trying to accomplish, trust each other, have ongoing and open communication about how everyone contributes to that, and are proud of their contributions. 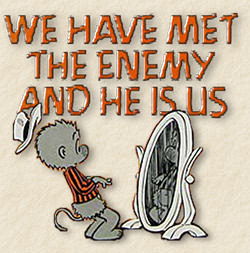 ← Practice First Rule of Bossing – Do No Harm →