How (and When) To Disagree With The Boss

Posted by Jeffrey Thomason on March 7, 2014 in Focus on Outcomes, Fosters Collaboration and Teamwork, Manages Conflict | Leave a comment 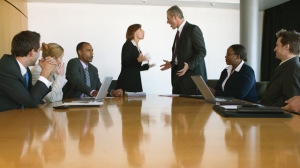 There are several common pieces of DNA in every person who tends toward the leadership path in life. One of those common elements is a confidence in one’s own opinion or abilities that under the best of circumstances, can translate into the courage to seize opportunities as they occur, or make bold decisions when others hesitate.  All good, as they say. However, most of the accepted personality trait tests (Meyers-Briggs, True Colors, etc.) also speak of “shadow” traits.  These are the flip sides of your strengths and how they are perceived by others.  For example, confidence can be viewed externally as arrogance.

Which brings us back to the title.  There is a high likelihood that at some point in your leadership life you will have a divergence of opinion from the boss.  Regardless of how history treats it, at that moment in time, you will be convinced that your way is right, and the boss’s way is wrong/unjust/timid/overconfident, etc., etc.,. You will not only be convinced of your rightness, but frustrated as to why the boss doesn’t see the obvious path that you do.

Terry Starbrucker has a good story about this perhaps being the moment you found out that your team, at heart, isn’t a democracy. With that aspect as one foundation, and the other being that your boss is otherwise sane and within normal tolerances on the DSM scales, there are a few ways to approach this scenario that end up in Pleaseantville, Population: You.

The first general step is to make sure that each of you has the same information about the decision.  Under some circumstances, there may be additional facts or concerns that the boss has that weren’t (or couldn’t be) shared with you. Some of those concerns may be goals you hadn’t considered or weren’t part of your thought process. Thus, perhaps your process was incomplete in some way. You should make sure that you have identified all the areas of agreement (if they are there) because these are money in the bank for the conversations to follow. Make sure your issue is worthy of the moment.  Interpersonal issues with colleagues should be fleshed out before you bring the boss in.

The second general step, having decided that all the information is on the table, or visible in some manner, is to decide on an approach. Private is better than public, for obvious reasons.  That is a foundation for supervisory-subordinate conversations in general so this is no time to flip the script with a boardroom moment. Approach laterally instead of frontal, by offering a suggestion or observation, rather than a direct counter.  Your goal is influence, not dominance. Alternatives are better than critiques, and most (good) leaders expect that their team will bring solutions for each of the problems they highlight. Don’t even think about handing a crap sandwich of some compliments wrapped around a big complaint.  Leaders will blow through that in a second. And understand, this conversation is not about making the boss defend their decision.  It’s you who needs to defend your disagreement. Tone is critical.  There is a pretty clear line between being collaborative and problem-solving, and adversarial and difficult. Consider future decisions and the groundwork you are laying for resolution.

Lastly, after fact-checking your case, and (hopefully) picking the right approach, there is the aftermath.  In the movies, of course the boss always comes to their senses (unless the movie is “9 to 5”).  You aren’t in the movies.  If you win even half of these situations, you’re heading to the Hall of Fame.  The fact is, you won’t.  What matters is that you demonstrated your relevancy to the boss by providing exactly what they are looking for from their management team, which is not a lot of head-nodding around the table. You have to decide whether or not this issue is a deal-breaker for your tenure with the team. As one of my favorite blogs “Leadership Freak” notes, once the call is made, you need to either paddle like hell, or get off the ship. Joseph Grenny’s “Crucial Confrontations” advises that rather than being discouraged, recognize that a frank and honest management team not afraid of conflict and willing to put aside ego, drama, and fear is what makes good companies great. If you frame all these conversations in a “life or death” paradigm, eventually, death comes.

← The Hard Truth About Interviews What’s in a Leadership Culture? →