Home » Manages Conflict » Ends and Means and Other Theories 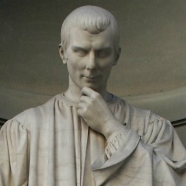 Ends and Means and Other Theories

In personal conversations with followers of The Jersey, the subject of how a post is created is a frequent topic. Most often, the general question is about source material and inspiration. If it is not readily apparent, inspiration is the common denominator for just about every human action that can be documented.  This is where it gets trickier. Inspiration can come from many places, whether sinful or beatific. In such a huge topic, keeping it simple is a direction I have tried to follow in choosing topics. But, rest assured, every topic you can read about here is inspired by something. Inspiration drawn from anger or frustration is not where I personally like to go, but it can work for others. However, that is not to say that either of those emotions aren’t going to affect leaders, or even myself.  Good leaders have a strategy for dealing with the things that create emotion, especially in such ways that may jeopardize the mission or the team.

The debate between ends and means is one that can cause particular emotions to insert themselves into the dynamic. The term “right thing to do”, or “moral thing to do” are the types of absolutist statements that can quickly turn a reasoned discussion into a serious Donnybrook. It can also lead to a serious division in the team, if that is where the debate lies. Teams are functioning at their best when there is a shared vision of where they are trying to go (ends), and a united effort in the strategies used to get there (means). Assuming that the end is a legitimate achievable goal, the various methods considered by the team in getting there can sometimes break down into “camps”.

Consider for a moment, a football game. The offense has a goal to advance the ball across the end line as many times as possible, with a strategy of play-calling designed to achieve this goal. Not every play is run with the expectation of a touchdown, but each supports the bigger goal. However, there are limits and rules, and boundaries, and constraints. Referee’s are there to judge whether a play broke the rules, or went outside the boundaries. If this happens, the team is penalized and retreated.  At the same time, the opposition seeks to actively disrupt the offense, and deny the ultimate goal, again, within the boundaries and constraints imposed. In relation to life, this is all a grand fantasy.

In life, there are no referees, unless one considers that they might flag a play years after it happens, with the touchdown already on the board and the game long over. There is also supposed to be agreement on the shape and size and boundaries of the field, unless of course, there isn’t. If you want to run a play into the grandstand under the tunnel, and get into the end zone from the back, if no one is watching, you can do it. And if the defense cheats, it can be used as justification to run all new plays outside the rules, because, ultimately, there are no rules.

In the theory of ends and means, there is a strain called “consequentialism” which simply stated, says that the ends justify the means. If a goal is morally important enough, it can be achieved at any cost. As leaders, we are often called upon to referee those in a position to make that call. Sometimes that person works for us, sometimes that person is our boss, and other times, it is us. It is for us the opportunity to make the call on what is right and what is wrong.  There is often great pressure, due to fear, or anger, or hubris, to choose the end over the means.

When your field of play involves the lives and liberty of fellow human beings, and the state has invested you with authority over them, leaders are often the only barrier between ends and means. You will find that a lonely place, whether the decision is small and seemingly inconsequential, or a hugely life-defining moment. From an ethical standpoint, ethics is not just about what you do when no one is looking. It is a daily decision-making path that eventually leads one to a dead-end in which no decision is possible. It is a hundred decisions, and not one. 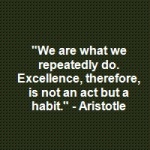 There is a reason that successful healthy organizations establish mission statements, and vision, and core values. It is to shape the playing field so that players can referee themselves and each other. It is also a sign of healthy organizations when debate and discussion is encouraged, and the role of ethical decisions, and aligned decisions, is a topic that every member of the team can confidently engage in without fear of being an outlier.  Good leaders believe in debate, and support the notion that how we do what we do is as important as why we do it.