Home » Fosters Collaboration and Teamwork » Loyalty And The Team

Loyalty And The Team

Posted by Jeffrey Thomason on September 28, 2014 in Fosters Collaboration and Teamwork | Leave a comment 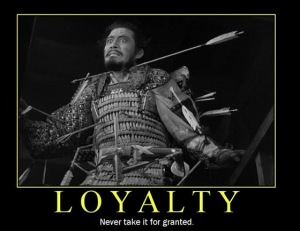 The history of literature and art in Western civilization is expressed in a number of recurrent themes.  Some are positive, like love, loyalty, struggle and triumph, sacrifice, friendship, and family.  Others are the shadow traits of each of these, such as hate, treachery, cheating, cowardice, and forsaking the team for the loneliness of the selfish act. All are, at heart, humanity, and to us, always compelling.  We read literature and cry, laugh, affirm, or deny that which makes us who we are.

Loyalty to one’s team, tribe, family, brothers and sisters, or any group to which at some point a pledge was freely given, is a central theme.  It would be fair to say that the recorded history of human behavior is a never-ending attempt by man to live up to the literary ideal.  We see it in the stories of sacrifices by our first responders on September 11th, the images of the pain shown by warriors when a brother falls, and the shared ecstasy of victory or the agony of defeat by the sports teams we subconsciously feel are part of us.

The shadow trait, disloyalty, is a knife-edge to be negotiated carefully.  Too often in our history, disloyalty is an unfortunate label initially applied to someone who refused to compromise an ethic or truth for the sake of unity. History is full of human beings fully endowed with integrity who saw greed, or lust, or sloth in a particular act and at great sacrifice to themselves, did the right thing.  It is to their memory that we constantly dedicate the ongoing education of our ethical mind.

The disloyalty, perceived or actual, of those brother in arms to their comrades is a different sort of act.  Americans as a political entity despise the traitor who sells their country for silver or abandons their friends in the field.  From the American Revolution and Benedict Arnold, to Edward Snowden and Bowe Bergdahl, the accusation of “traitor” carries with it a powerful stigma within our society.

How then can one have a discussion of loyalty or disloyalty to the team? What defines either of those terms and to what act or thought is it applied? Can a person be both loyal and disloyal for the same act? Who judges? As leaders, we encourage the telling of truths, the acts of integrity and honesty, and other behaviors that can sometimes conflict with our equally heartfelt message, which is to be loyal to the team and sacrifice for your comrades.

One particular incident is instructive of how a modern-day leader views the dynamic of a team and the need to ensure that everyone is committed to the established direction. In 1944, General Dwight Eisenhower was assembling his team of officers to plan what would eventually become the invasion of Normandy.  General Eisenhower was aware that by the time the invasion took place, that over three million American serviceman would be in England.  Acutely aware of the possibility of culture clashes with the host nation, Eisenhower had distributed to the troops a primer on how to act and behave while in England.  Eisenhower understood that nothing less than the Grand Alliance between England and the United States was at stake and that for better or worse, the multi-national team he was assembling needed to set the example for future relations.

His approach to team building was tested soon by an American officer who got into a heated argument with a British officer.  When Eisenhower investigated, he soon relieved the American and sent him home.  His investigation yielded that although insults were exchanged, the American referred to his colleague not just as a “SOB”, but importantly, as a “British SOB”.

As leaders, we are responsible for the moral education of those we lead.  This includes firm descriptions of how honesty and integrity play out in the workplace, and that we take the responsibility to model them every day. At the same time, especially in fields where people are both figuratively and literally going to be in a position to put their health and safety on the line for their teammates, there can be no compromise. As I mentioned in Fellowship, once the team departs the door, they are one and the same until back on safe ground. Personal likes or dislikes are irrelevant. The responsibility and accountability for each other is equally, and freely, shared. Teams that will not have each other’s backs in harm’s way, are not going to have it any other place either. Once that state is reached, the cancer becomes potentially fatal, and surgery becomes the only option.

← Leaders Show Up If I Only Had Some Courage →