Home » Empowers Others » Bloom Where You Are Planted 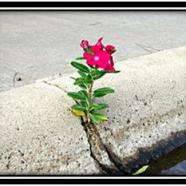 Bloom Where You Are Planted

Posted by Jeffrey Thomason on June 20, 2014 in Empowers Others | 1 Comment

The newly hired coach of the New York Knicks, Derek Fisher, gave a press conference a week ago in which the many shortcomings and challenges with his new team was the topic of conversation. Fisher’s response was an example of leadership mindset at it’s finest.

“How do you make the most of what you have? That’s the message I’ll send to these players every single day. We have to bloom where we’re planted a lot of times in life. You can’t look for ways out and excuses why you aren’t excelling.”

Bloom where you are planted.  Translated, it means be happy where you are and make the most of it while you are there. This phrase is not new, in the sense of a discussion or bromide about satisfaction or contentment.  The phrase is often discussed as an explanation for Paul’s words to the Corinthians about being happy where one is and drawing inspiration from what is around you every day as opposed to being miserable about where you wish to be. There was a recent discussion in Forbes that spoke to a more recent interpretation. Jim Smoot’s site also discussed the phrase in a modern context, and from a leadership perspective.

One of the more common observations I have made over the past decade is the approach that people have taken to promotional interviews within a particular organization.  While it would be unfair to say there are only two perspectives coming from the interviewees’ chair, it often breaks down to this:  The job that people are seeking has tasks, responsibilities and accountabilities.  Of course, it likely comes with an increase in rank, and compensation. There are people who come to the panel and pitch how they would perform in such a role if given the opportunity.  Sometimes, they also come armed with excuses about why they haven’t done anything in the present position other than their assigned tasks because of a variety of limitations or barriers. The other group comes to the table and explains how they have been able to use their current position to acquire the knowledge and experiences that would serve their role in the desired promotion. In a sense, they explain how they have been doing that job, and holding themselves accountable for that level of performance, for some time.  In many cases it is clear that they did so with no expectation that it would ever happen, and in others, they made a decision that at some future point in time if the opportunity presented, they would be ready.

As leaders, we have a responsibility and an obligation to make the most of whatever situation we are thrust into.  It was once said of the famous Alabama football coach, Paul “Bear” Bryant, that “he could take his and beat yours, and then take yours and beat his”. As leaders, we should be committed to making whatever team we are leading a success.  At the same time, we should be inspiring those we lead to make the most of every opportunity they are given, and to assist them in manufacturing opportunity.

As leaders, and as people who desire to live a leader’s life, we need to live in the moment.  Leaders make plans, they see the future, they spend time on preparation.  Leaders create and communicate a vision that people are inspired to follow. But, they excel in the moment.  In each thing that they do, they bring focus, preparation, and discipline. Whether it is your job, or your career, or your family, make sure that your efforts each day are the best you can make out of your situation. Sometimes, plans don’t work out. Goals change. Priorities shift.  What was once considered a given becomes a struggle.  Leaders demonstrate this every day by playing the hand they are dealt. Play your hand, and bloom where you are planted.

← Some Things Don’t Change What Experts Say About Lessons Learned →