The Power of Perception

Posted by Jeffrey Thomason on March 16, 2014 in Communicating Effectively, Fosters Collaboration and Teamwork, Leading Self | Leave a comment 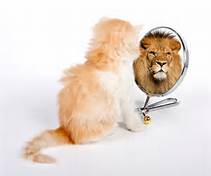 The late Steven Covey has long been considered one of the more important voices in the self-help genre over the past few decades.  His signature work, The Seven Habits of Highly Effective People, was first published in 1989 and has sold over 15 million copies in 38 languages.  These numbers suggest that Dr. Covey’s observations and suggestions about personal development and personal evolution have found universal acceptance amongst a pretty wide audience.  He is oft-quoted and even more often cited.

His simple observations about the power of the human mind continues to be more true than ever, especially in regard to the “emotional intelligence” factor that is now becoming a popular term used in the leadership development arena. In the end, our own minds are our greatest strength and yet, our most dogged enemy. Covey’s “habits” start with the goal of mastering one’s self, which in most instances means getting out of your own way from time to time.

One theme that I have alluded to from time to time in this blog is learning to accept the perceptions others have about you, if only to recognize where you might need to put in some work. I have also suggested that your ability to control your own impulses represents a turning point in your leadership journey, if only to meet the provocative with the intellectual. The truth is that you can argue with the vision that someone else holds but you can’t tell them they are wrong.  Perceptions just do not come in “right” or “wrong” flavors. They do come in “ignore”, “accept”, or “acknowledge” flavors though.  Which is good, because those are the flavors that lead to some honesty. 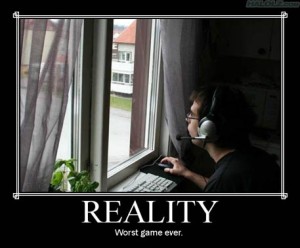 Having arrived at the point in which you have become aware of a “perception” that one (or many) hold of you, you have to realize that the perceiver is under no obligation to do anything else at this point.  It’s all you, baby. Perception is reality, until you challenge it. John Baldoni’s N2Growth blog notes that as a leader, the most important thing you can do about perceptions is understand WHY other people have theirs, which is way more important than why you have yours. Thus, your leadership paradigm must include perpetuating an atmosphere in which honesty towards the boss, the boss’s ideas, and the boss’s leadership style is encouraged.  Consider for a moment, the last time you had a conversation with one or more people who started with “OK, my boss hat is off…let ‘er rip”.  Have you ever? 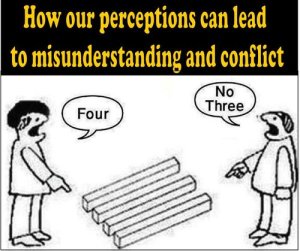 The perception “process” is pretty intricate and perhaps beyond the scope of the format of this blog. Acknowledging that it is a complicated process, leaders can do some simple things to ensure that they remain as cognizant of it as is likely possible. Managing your own judgment process, including the amount of data you gather, and the goal (of appearances) to be fact-based rather than arbitrary is one step.  Being flexible enough to change or shift decisions when new data becomes available suggests a fact-based decision-making approach that reduces the perception of arbitrariness.

Most importantly, understand and respect your position in the organization. You have a lot less opportunity to “get it wrong” than others and that’s the hard hand dealt to the leader.  Welcome to the big leagues. Understand that you “communicate” every day with what you say and do, and the higher you are in the organization, the more people “perceive” your thoughts and beliefs through your actions rather than words.

Ultimately, as a leader, you have the ability to perpetuate a world view in which the team tells you what they think you want to hear, by how you reward “right thinkers”, i.e., people who think like you (also known as “self-serving bias”). The wages of this folly is disaster. The fable of the “Emperor has no clothes” has in its modern-day parable, the concept that if you want something bad enough, you’ll believe whatever you need to believe to see it through.

“For a successful technology, reality must take precedence over public relations, for nature cannot be fooled. — Richard Feynman in the Rogers Commission Report on the Challenger Disaster”.

← The Future of Work Entitlement and Leadership →