Home » Communicating Effectively » The Truth, and Other Things

The Truth, and Other Things

Posted by Jeffrey Thomason on September 12, 2013 in Communicating Effectively, Leading Others, Professional Presence | Leave a comment 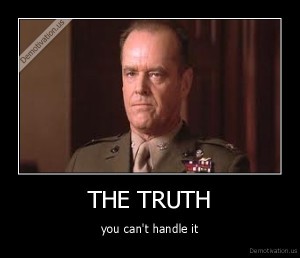 There are two possibilities about your team that you can contemplate from your position of leader. The first possibility is that they will follow you because they want to. Or, they will follow you because they have to. Despite the apparent differences that each of these realities suggest, there is one important similarity. You have to wait till the end of the post to get it.

First a quick discussion on how to tell the difference. If your team sees the value of your leadership, and trusts you, they will accept responsibility and accountability for things that support your success (and theirs). They are disappointed if you fail, are aligned with your agenda, and want to be inspired and motivated by you. They say things like “I trust you”. They tell you the truth about things, even when they know you might disagree. They believe, and acknowledge, that you support them. They will go the extra mile for you and do so without complaint.

If you are fortunate, you have the team I just described. However, you may have a different team, whose hands might be in, but whose hearts are most definitely not. They will appear to be onboard but are just going through the motions. They may question you as a leader, the goals you have, or just think they could do it better and are invested in your failure (and their validation). They will likely keep those thoughts to themself in public, but believe me, in private they are tuning you up big time. Some may just think its futile to raise a question and just trudge along like donkeys.

Take a look at your direct reports and ask yourself some questions. Do they tend to agree with your every position, even on controversial issues? Do they say things like “just tell me what to do”? Do your team meetings often lapse into silence? Trouble getting volunteers? Frequent requests to transfer to other departments? The truth may not be a frequent descriptor of how those conversations are going.

And now for the important similarity. None of these examples, in either case, is a permanent state that you will have for the rest of your career, or your time as the leader of this team. If you fall into the category above where your followers are not on board with you, that situation can be corrected. It will take hard work on your behalf to overcome whatever you have done to get to that point in time where they trust you and will tell you the truth. Your team wants to know that you care about them before they are going to care about you. You will need to help them understand why you do what you do and if they can’t get “sense-making” from you, they will go elsewhere.

If you fall into the category in which you have a finely tuned machine of a team and in your opinion, truth-telling is a daily event shared by all then take heed. Having people want to follow you is not a permanent state. It must be earned, renewed, and earned again, if lost. If you don’t know where they stand, you probably haven’t checked lately. Silent compliance is the killer to any team’s likelihood of future success.

← Does Management Even Matter? – Leading Your Organization The Learning Leader →