Posted by Jeffrey Thomason on April 29, 2013 in Focus on Outcomes, Fosters Collaboration and Teamwork, Leads with Maturity and Passion, Professional Presence | Leave a comment 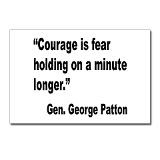 Courage, Apathy, or Fear. From your viewpoint as a leader, which one defines your organization? Each one of these words can define the culture of an organization, the people in it, and the fundamental way that the organization works its way through the cycle of decisions and opportunity. Does your behavior as a leader, or as a follower, or as both, define you and your team? One is clear – culture eats strategy for breakfast.

When an organization is ruled by fear, it manifests itself in defensive decisions, a pessimistic view, and an absence of positive expectations. If you belong to this organization, the decision to propose a new idea, or raise a question becomes a critical emotional event ruled by past observations and the anecdotal history of those foolish souls who came before you. They dared to question the status quo or proposed a new direction or solution and suffered personal and public rebuke for doing so. Initiative in a fearful organization is discouraged. Do not rock the boat, do as has always been done and above all, don’t be noticed or draw attention to yourself lest you draw the ire of the people who created this culture. Leaders of fearful cultures tend to be micromanagers and perfectionists who don’t like to be upstaged, wrong, or even questioned. This type of culture generally has rigid and enforced levels of authority and quickly and vigorously punishes those who paint outside their carefully drawn lines. Lateral communication is suspect, information is hoarded, and appearances are everything. Mistakes are not tolerated and failure is blamed on incompetence rather than noble efforts designed to achieve a positive end. This is the “zero-defect” environment and survivors of this culture learn to limit their exposure to risk, and thus, failure. The path to success is to follow the company line, support the status quo, and fail less often than peers.

“Only fear can defeat life.” – Yann Martel, Life of Pi

The apathetic culture neither punishes nor rewards its members. It generally shows no reaction at all to good or bad behavior or performance. It has no vision, makes no decisions, and most initiatives die a lonely death. If it was a gym, the slogan would be “no pain…no pain”. The learned behavior on this team is that getting ahead is a matter of existing from day to day until it is your time and your turn. Achievement or initiative mean little or nothing. Membership identity is limited to a specific task and function rather than the organization as a whole. Those who appear to be industrious are mocked not for taking risks, but for the futility of doing so. Units within the team are not linked in any coordinated or integrated way. Members of this organization don’t particularly feel much emotion about what they do and membership is simply a way to finance the requirements of life rather than to nourish the soul with meaningful labors towards a noble goal. It is hard to connect behavior with outcomes in the apathetic culture because no one has a good idea of what a desired outcome is, or that they are contributing to them. If the culture has goals, the apathetic follower takes no ownership in them.

“The opposite of Good is not Evil. It is Apathy” – Elie Wiesel

The courageous organization values its work. It is proud of its mission, and encourages those who share the same perspective. Its mission and vision are clearly communicated, both within and without. The courageous culture is one in which the members themselves set, and enforce the standards and expectations. Leaders of courageous cultures value honesty and initiative and are not afraid to change directions, fail, or challenge traditions when the potential for gain or success outweighs the consequences of failure. Members feel valued and easily connect their daily achievements to the success of the group. They are willing to propose new ideas, challenge practices, and attract attention because it is safe to do. The path to satisfaction is available to each individual, and is a product of their own willingness to commit to the success of the team, and own the results. Courageous cultures believe. They innovate. They trust. They speak up. They have courage to fail and the courage to take action.

“Success is not final, failure is not fatal: it is the courage to continue that counts.” ― Winston Churchill

← Crucial Conversations – Manage By Wandering About →